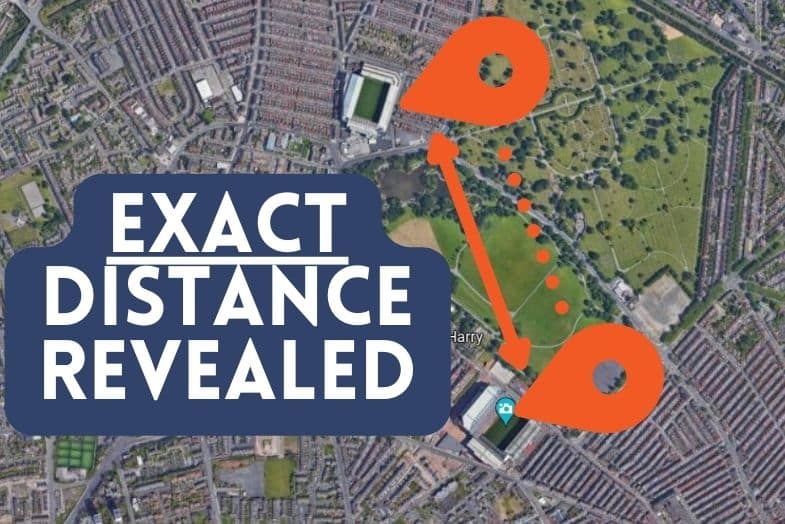 Liverpool versus Everton is one of the most recognisable derbies in football, with both sets of teams enjoying domestic success, particularly during the ’80s. While there has been a larger gap between the two teams in the table in recent times, the Merseyside Derby is still a hotly contested battle on the pitch.

With two Premier League clubs in the same city, it’s easy to see why fans of either side can get heated but there is also space for friendship, especially as it’s not uncommon for families to be divided by the team they support. But just how close are Anfield and Goodison Park to each other? And how can two large teams survive in such close proximity?

What is the Distance Between Liverpool and Everton?

Liverpool’s Anfield and Everton’s Goodison Park are just 847.31 metres apart (between the pitches). When you can see your rival’s home stadium from your own then you know it’s important to get a win for those all important bragging rights after the derby.

Why is Goodison Park So Close to Anfield?

Liverpool and Everton’s history explains why Goodison Park is so close to Anfield. Everton originally occupied Anfield, before Liverpool FC was founded following an owner’s dispute. Liverpool moved in, while Everton moved to Goodison Park, the first purpose-built football stadium in England.

Given the location of Everton’s original home, it made sense to stay in the area to ensure that the supporters didn’t have to travel too far to see their team play. Everton played at Anfield for eight seasons before vacating to create a new home to match the club’s ambitions.

Do Everton and Liverpool Play at Home on the Same Day?

From a logistical perspective, it makes sense to have Everton and Liverpool avoid playing their home games on the same day. Also, Premier League fixture compilers must ensure that the two club’s home fixtures do not clash.

Despite this rule, due to a quirk in the fixture listings in the 2016/17 Premier League season, Everton and Liverpool did play their home fixtures on the same day. This occurred because Liverpool has asked Burnley to switch their home and away fixtures for the season as Anfield’s expansion wasn’t complete in time. Burnley obliged and in March 2017, Goodison Park and Anfield were occupied on the same day for the first time in 123 years.

What Are the Two Closest Football Grounds in Britain?

Local rivalries don’t get any closer than Dundee vs. Dundee United, with the two club’s stadiums just 0.2 metres apart. Notts County and Nottingham Forest are the next closest rivals with a distance separating their stadiums of just 0.7 metres.

Everton and Liverpool are in third place while rounding out the top five are Chelsea and Fulham (1.9 metres apart) and Aston Villa and Birmingham City (3.5 metres apart). Local rivalries mean that bit more when either fan base is just a stone’s throw away from the other. Which is a good reason why their fixtures are split to avoid unnecessary fan trouble!