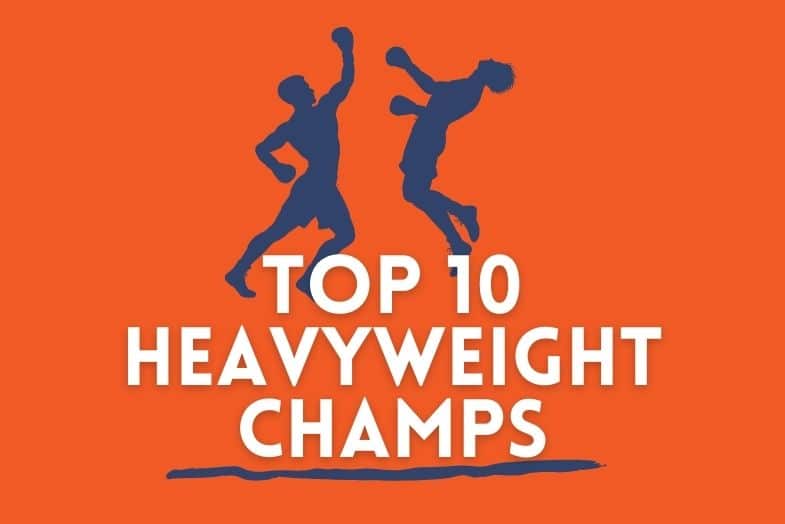 Boxing is a statement sport that has been around for at least 5000 years according to reports. Making it one of the oldest sports in the world. In the past, we’ve seen exceptional heavyweight boxing champions knocking their opponents out of the park. The same can be said for the boxers of the modern era. While boxing has been taken to new heights and continues to do so, we’ve also seen an influx of other fighting sports such as UFC, where you’ll see some of your favorite fighters bust it out and train in various MMA gyms across the world to participate in the numerous competitions. Here is our list of the best American heavyweight champions of all time in no particular order.

There will never be a time when we don’t utter the name of Muhammed Ali. He is the greatest to ever do it. He reigned supreme and we completely understand why. Ali’s GOAT (Greatest of All Time) status is cemented in the history books and his name can never be erased. He has fought against fellow GOATs such as Joe Frazier and George Foreman and Ali’s GOAT status extends even further than his career since he was also an activist. The boxer’s birthday is still celebrated every year to commemorate his greatness.
Best fight: VS Joe Frazier, TKO in round 14

Holyfield’s reign lasted from 1984 to 2011; an impressive 27-year career. While he started in the cruiserweight division during the 80s, when the heavyweight bug bit, the rest was history! One of his biggest accolades is that he is the only professional fighter to win the heavyweight championship on four separate occasions. If this doesn’t give him GOAT status, then what will?
Best fight: VS Mike Tyson, TKO in round 11

Iron Mike has had difficulties in his career and his personal life, but no one can take away from the fact that when he was in his prime, he was one iconic athlete. During his professional career, Iron Mike was known for his ferocious punches and intense knockouts. During his so-called reign of terror, Tyson fought many greats including Larry Holmes, Evander Holyfield, Lennox Lewis, and more.
Best fight: VS Buster Mathis Jr., KO in round 3

The Easton Assassin boxed professionally from 1973 to 2002. With a career spanning nearly three decades, Holmes beat the likes of Ali at the ripe age of 38. This was one of his biggest career highlights as Holmes faced a celebrated Ali at the time in 1980 but the Easton Assassin cemented his status as one of the greatest when he won after 11 rounds. Fun fact, he was the heavyweight champion for eight years.
Best fight: VS Ken Norton, split decision, 15 rounds

Smokin’ Joe as he was nicknamed, was a name given to him by his trainer, Yank Durham. According to his autobiography, Yank gave him the nickname as he used to say this to Joe in the dressing rooms before sending him out to fight. This legend competed professionally from 1965 to 1981. He was known for his sheer strength, punching power, and all-out pressure in his fighting style. Smokin’ Joe also defeated Ali which happened to be Ali’s first loss!
Best fight: VS Muhammad Ali, unanimous decision after 15 rounds. Also nicknamed the fight of the century at the time.

Forget those amazing George Foreman Grills as we first got to know Big George inside the squared circle. In an impressive three-decade career, Big George packed many punches in the ring from 1967 until his retirement in 1997. As a two-time heavyweight champion, one would think this would be enough for the athlete, but Foreman is also an Olympic medalist. Funny enough, George Foreman became even more famous after his boxing career when he became an entrepreneur. It was also recently announced that a George Foreman biopic is in the works.
Best fight: Gerry Cooney, TKO in round 2

Now, what makes Joe Louis one of the greatest to ever do it? Is it the fact that he has 25 consecutive title defenses? You’ve got that right. Some of the bigwigs who faced Louis’s fists were Max Baer, Max Schmeling, James J. Braddock, and Jersey Joe Walcott.
Best fight: Primo Carnera, TKO

Imagine having a record like his; 49 – 0, and 43 of them were by a knockout! He beat some of the greats like Joe Louis, Ezzard Charles, and Archie Moore. Rocky Marciano was highly feared during his reign as a professional boxer, which did not last that long – he only competed professionally from 1947 to 1955. Fun fact, he is the only boxer to ever finish his career undefeated.
Best fight: VS Jersey Joe Walcott, after 15 rounds

Arnold Raymond Cream AKA Jersey Joe Walcott was a relentless hard-punching athlete. He boxed professionally from 1930 to 1953. In fact, Jersey Joe broke the record for the oldest man to ever win the world heavyweight championship at the time – later George Foreman would take this title. He did this at the age of 37.
Best fight: Cowboy Wallace, KO, in the first round

Let’s get right into it. Patterson was an exceptional boxer, so much so that he won the world heavyweight title at the age of 21. Competing for two decades from 1952 to 1972, he fought against many legends including Ali, Sonny Liston, Roger Russell, and more.
Best fight: VS Ingemar Johansson, KO in the 5th round